This project is a small part of a larger effort to recreate the Mycroft Mark1 with RISC-V.

The project is available to view on Codethink's GitLab.

Forgetting all the technical jibberish for a moment: RISC-V is just really cool. It's open hardware. That means that with the right skills and facilities, a person could take the specification, add to it and create their own custom hardware designs. They're able to do this for free, without having to pay a licensing fee.

RISC-V has the potential to disrupt the tech landscape in a big way. It's already finding its way into hard drive controllers and soldering irons. Beyond the embedded market (typically the domain of Arm CPUs and microcontrollers), it has eyes set on high performance compute where you'd typically find an x86 CPU (servers and desktops).

As a company, Codethink is interested in demonstrating that we can work with RISC-V microprocessors.
As an engineer, I feel like I've been given an opportunity to play with a new exciting technology.

The brief: Make a breakout board for a RISC-V microcontroller

The board should be a drop-in replacement for the Arduino ProMini. Thus it needs to have the same form factor as the ProMini, and pin compatibility with the ProMini. It would be nice if the board we produce could be made compatible with the Arduino ecosystem, such that our board could deploy a sketch made for the ProMini with minimal tweaking.

The only logical choice for the microcontroller: the GD32VF103CBT6 by GigaDevice

We used GD32VF103CBT6 by GigaDevice. This microprocessor was chosen because it is the only RISC-V microprocessor that we could feasibly get our hands on. Even then, finding a supply of the chosen chip was difficult. There are a couple of examples of dev boards with the GD32V that we did find (e.g., the longan nano). So the chips must be available somewhere. That said, after scouring the depths of AliExpress, talking to distributors and even approaching GigaDevice directly, we were unable to find a stand-alone supply of the chips. This was probably due to the global electronics shortage.

The GD32VF103CBT6 bears a striking similarity to STM's STM32F103CBT6 (a microprocessor with an Arm Cortex-M3 core). So in a worst-case scenario, we could just develop a board around the STM part while waiting for the availability of the GD32V to improve.

Ultimately, however, I ordered a bunch of Longan Nanos and removed the GD32Vs at our electronics workbench. This somehow works out cheaper than using the STM part. It was helpful that I just had some of these Longan boards knocking about my desk beforehand too. In the future, hopefully, LCSC will stock RISC-V microprocessors and help we could use them with JLCPCB's pick and place service.

Developing the board to match the Arduino ProMini's form-factor

I developed the board in KiCad, and unlike my first board, I was able to pester actual professionals to help put the design together. To date, this is the smallest and most densely packed board I've ever designed.

I tried to match the pins from the micro to their outputs in a way that matched what's on the ProMini, but there are some key differences:

I didn't know what to do with the boot pin, so I added solder jumpers to the underside of the board to allow me to either bring it high, low or leave it floating.

After putting together a board that matches the Arduino ProMini's form-factor, we went to JLCPCB for a test run. I wanted to use JLCPCB's STM Assembly service, but it turns out the Arduino ProMini's form-factor is too thin to qualify for the Assembly service. Keeping everything else the same, I made the board wider and used the extra space for better pin labels (earlier designs had these on the bottom of the board). That's why the design seems to have wings. They are not electrically active and can be sanded off if need be.

The boards arrived after a short wait. They arrived without the microcontroller, since it isn't yet in JLCPCB's parts library. So I got to spend a few hours liberating the controllers from a 3rd party's devboard (Sipeed's Longan Nano) and attaching them to my own.

As luck would have it, the board I designed did happen to have all the necessary pins for jtag broken out. I got an ST-Link V3, which comes with an expansion board with a full sized, 20 pin jtag port. I also created this adapter board that would allow me to connect the disparate spattering of jtag pins to the jtag programmer. 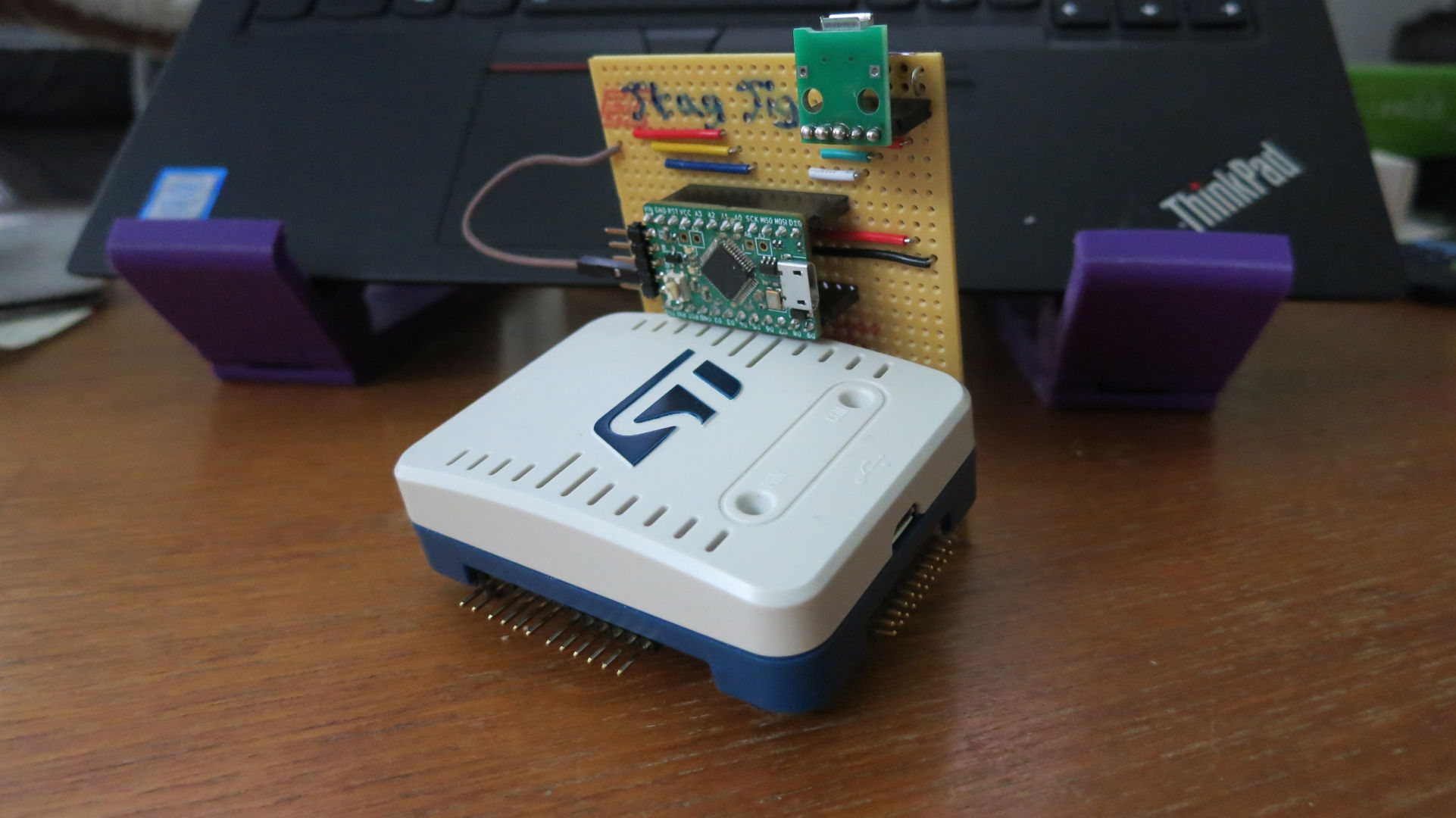 After doing all that, I found that I couldn't get the st-link to recognise the GD parts as viable targets. I'd have to find some other programmer. As luck would have it, I discovered the RV-Link project. This turns development boards with the RISC-V micros into jtag debuggers for programming other RISC-V dev boards that work by pairing up the jtag pins. I made this other board to Adapt the jtag header of the Longan Nano into a full-sized jtag port. 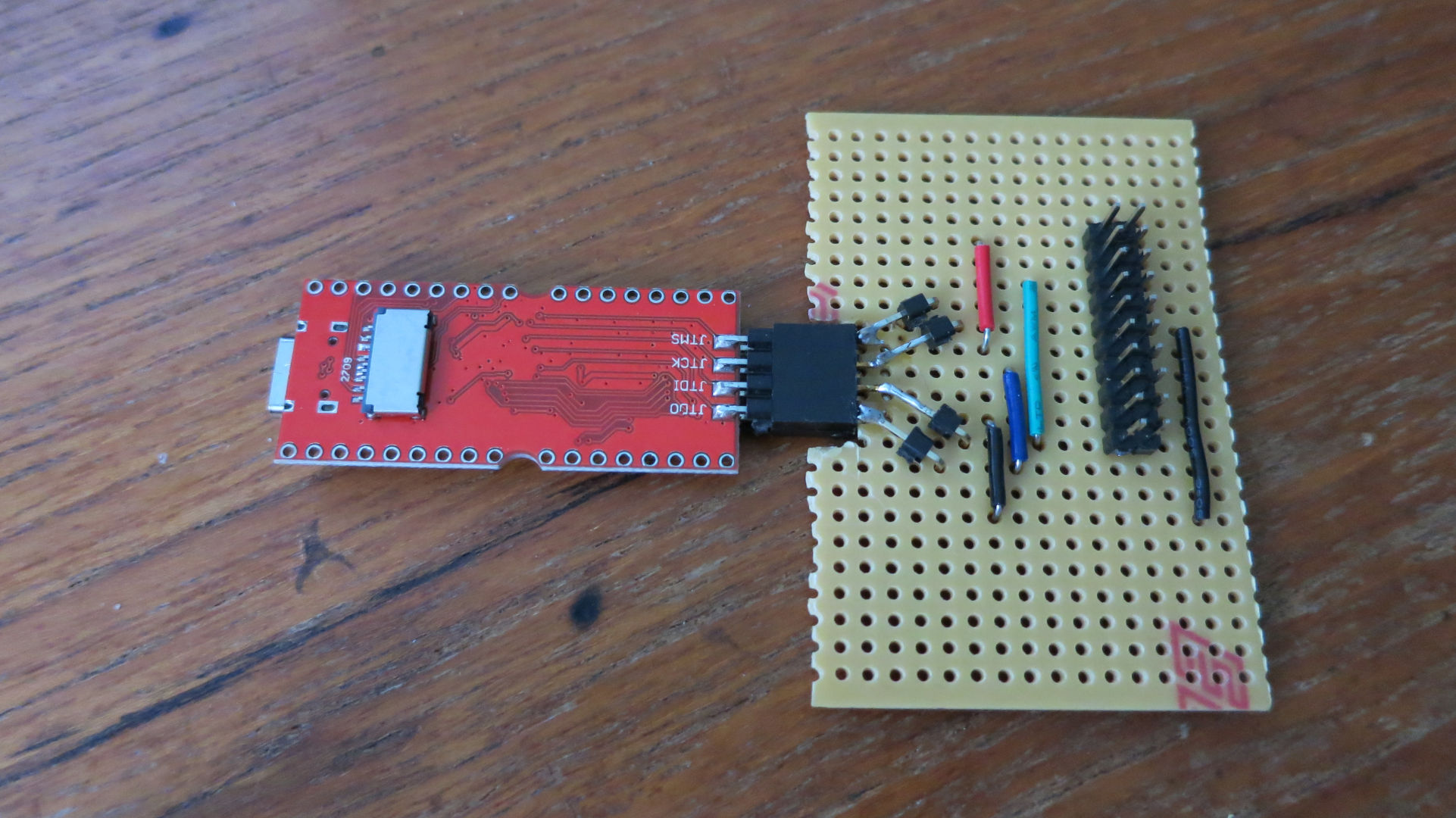 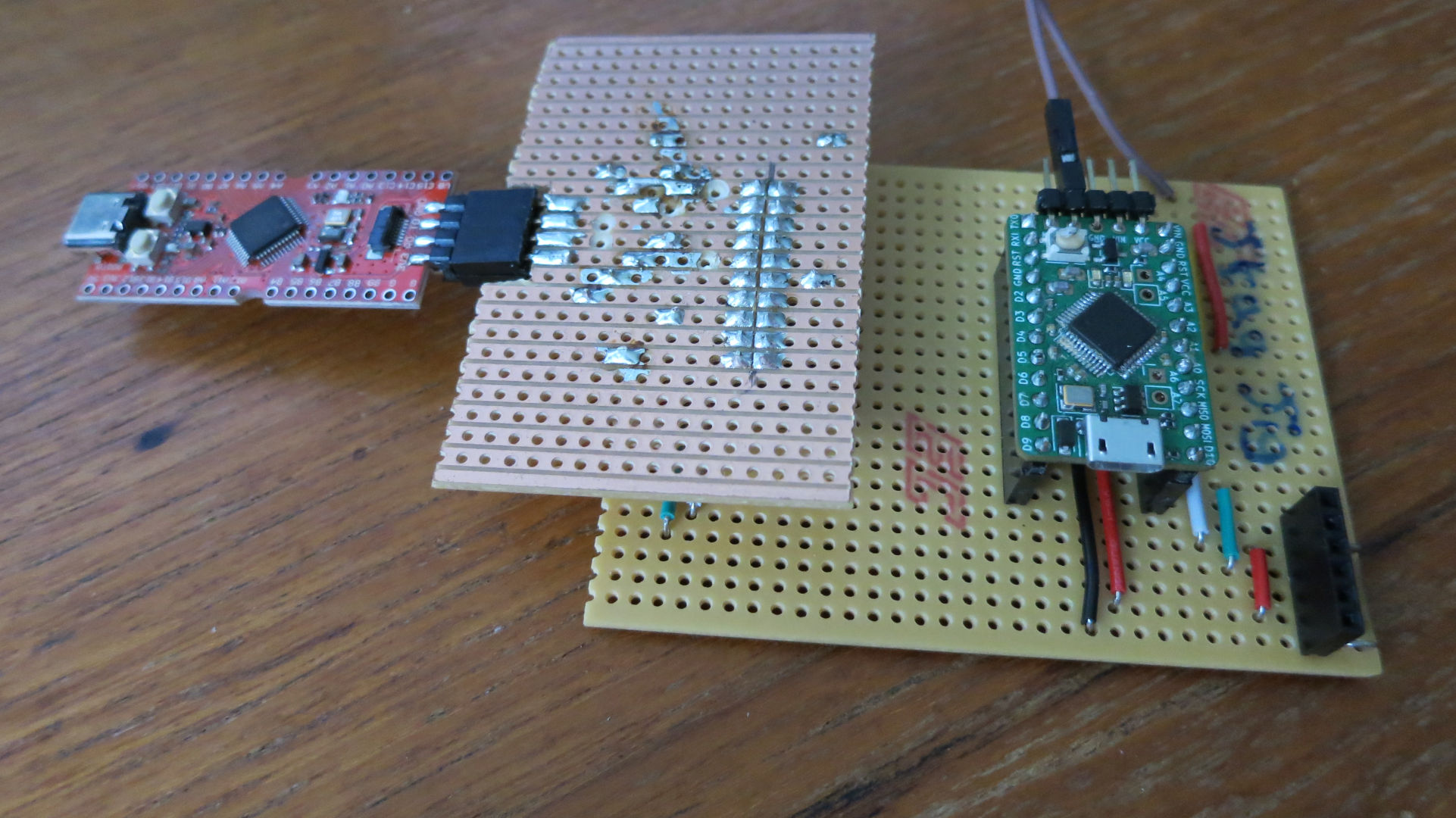 Thus using this Frankenstein's monster of a solution, it is now possible to program the dev board.

The boards are programmable using platform.io. Since they share the same micro, you can treat these boards just like the Longan Nanos. Except these have to be programmed using the RV-link. Also, the boot jumper must be held high while being programmed but should be held low otherwise.

I fixed the above flaws in the next revision of the board.

Version 2 has a functional USB port, a jtag header, and an extra button for the boot pin. I had to move the voltage regulator to be a little lower to accommodate a button, which replaces the boot pin's solder jumpers. The JTag header is a mirror of the RV-Link's JTag header, such that they can be connected directly together. 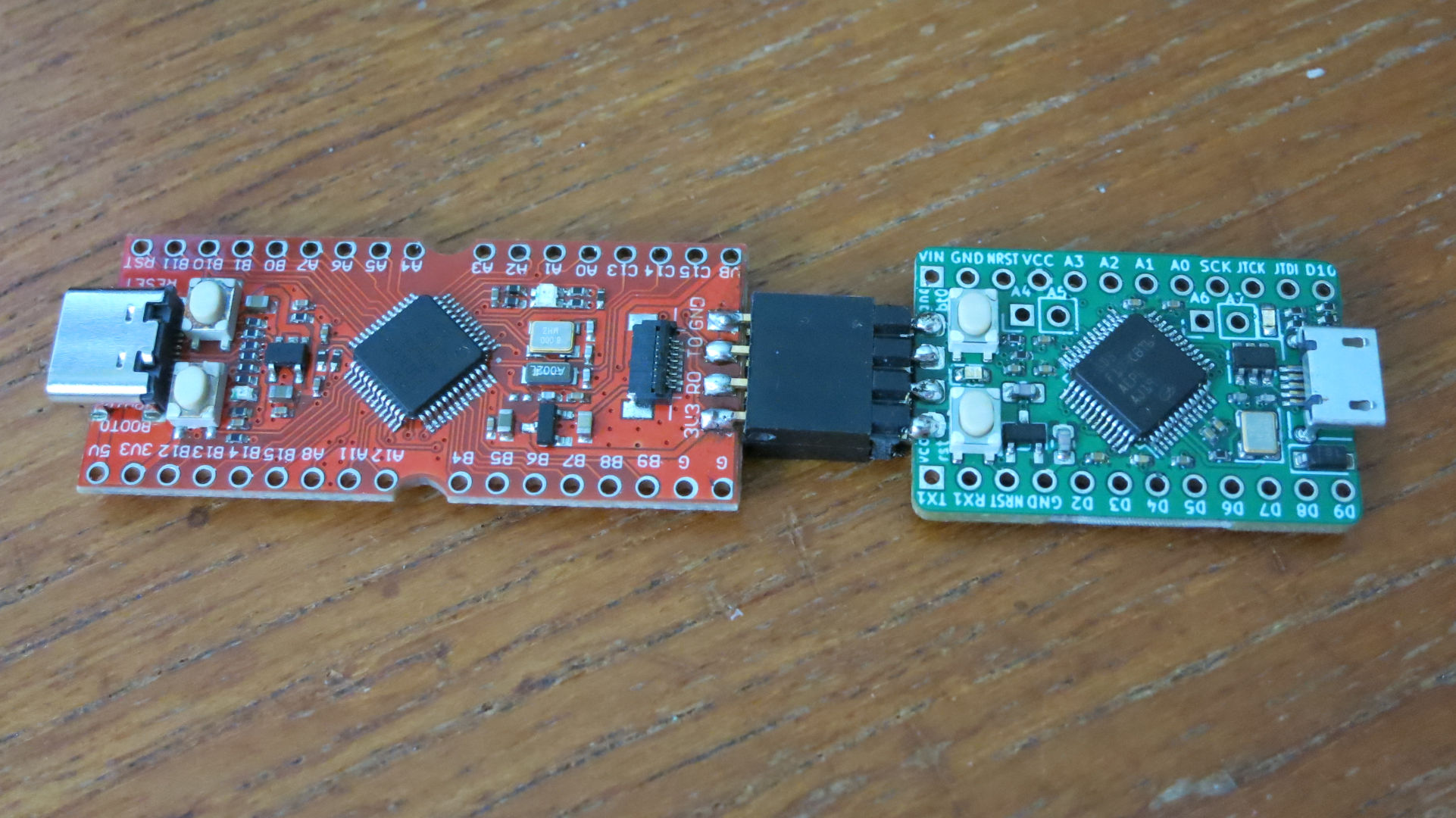 This is the most densely packed board I've designed.

Going forward, we can use this board and the experience gained from developing it in the future. The next steps will likely involve a custom faceplate for the mark1, which can either use this board or integrate with the microcontroller directly.

Keep up with our RISC-V news

Fill out the form to receive our latest updates on the open CPU architecture in your inbox.