Impact of COVID-19 on the Medical Devices Industry

Industry leading Medical companies are turning their attention to helping combat the fight. Manufacturers of ventilators and respiratory care such as Philips and Medtronic are committing to doubling production of ventilators over the next couple of months. Large companies from other industries such as Dyson, Ford & Tesla have also been looking to support production of medical system to support the exponential demand. As of yesterday, Medtronic were making designs of their ventilator systems public, in what will greatly support ventilator development.

China's largest medical device manufacturer Shenzhen Mindray Bio-Medical Electronics Co. believes there is still demand for 10 times the current availability of ventilators. “The demand is several times the orders we can take, the orders are several times our current capacity, and our capacity now is already several times what it used to be,” said Li Wenmei.

Many other Medtech leaders are actively working to release hundred of thousands of COVID-19 tests. Thermo Fisher Scientifc has produced 1.5 million tests and expects to ramp that to 2 million per week with an aim for it to reach 5 million per week in April, Roche are planning to ship around 400,000 tests per week.

Whilst the medical device industry is not going to be hit quite as hard due as other industries, hospitals are postponing elective surgeries in order to allocate resources to help infected patients. This in turn will have a knock-on effect for the medical devices industry, with a reduced need for systems. Routine check-ups at the dentist and eye-care locations have also been put off for the current time.

Data from Aidoc presented a 20% decrease in the volume of CT scans in the US and a 39% drop in Europe in comparison to the same point last month. The reduction in volume is likely to continue relating to the point in the previous paragraph that resources are simply being redirected to fight the outbreak. 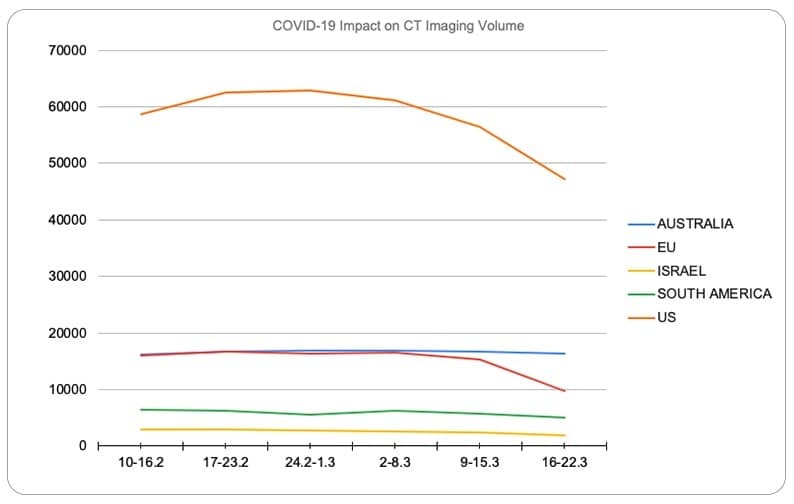 Moody's Investor Services recently published a report expecting the overall growth of the Medical device market to drop to 2-4%, compared previously to the 5-6% for the next 12-18 month period: "We expect a pullback in consumption in the first half of the year followed by a moderate recovery, assuming global efforts to arrest the spread of coronavirus are successful. As the coronavirus continues to spread, hospitals will need to prioritize infected patients who are most vulnerable to its effects.” - Scott Tuhay, Moody Vice President.

The Food & Drug Association of America (FDA) have been actively looking to approve new crucial products to fight the outbreak and aiming for regulation to be in the way as little as possible. AdvaMed released a list of seven tests given special authorisation from the FDA.

UK Government has given exceptional circumstances for use of non-CE marked medical devices, namely ventilators, to be used in support for the hospitals in need.

It is also expected that the EU Medical Device Regulation, which was due to be implemented in May 2020, will be postponed although this is yet to be confirmed.

According to data gathered by Palo Alto Networks, the US is combating COVID-19 while having 83% of their healthcare systems run on outdated software, leaving themselves open to security exploits.

With more critical and diagnostic devices being used during this period more than ever, this leaves many hospitals vulnerable to hackers. 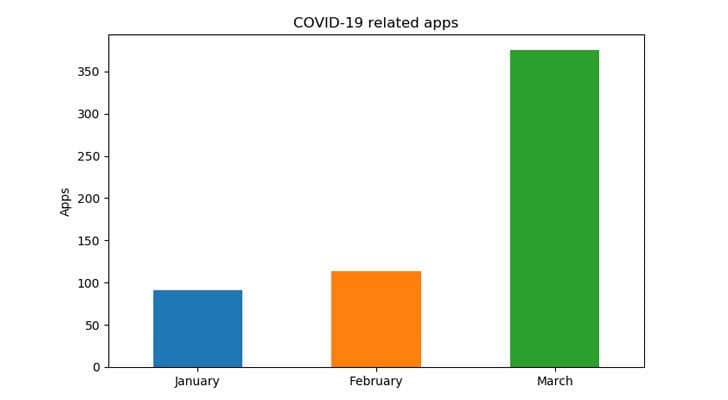 In other developments, according to researchers, in past 3 months, over 570 Android apps updated their manifest (package name, activities, receivers, etc.) to contain 'coronavirus' related keywords. Though many of them are clean, some are malicious, the details of which can be viewed on the linked source.

In what is likely to push forward a new norm, doctors are using phone and video calls to hold appointments with patients who are not in critical condition to free up resources. This in turn also reduces costs and is of greater convenience for both he doctor & patient. As we are seeing with the work form home trend being discovered due to the COVID-19 outbreak, it's likely that telehealth appointments will start be utilised much more in the future, beyond the current troublesome times.

Medical conferences scheduled over the next few months such as BIOMEDevice Boston, Design of Medical Devices 2020 and HIMSS 2020 have been pushed back to later in the year. With many company releases of new medical devices being put on hold during this time, this will likely produce a busy conference schedule later on in the year should we be able to nullify the virus, although that is still very speculative at this stage.

Competition has been put to one side and companies across the Medical industry are in open communication and actively collaborating to work together in producing more critical devices, respiratory care and tests.

In what is likely to be a hugely beneficial move to support treatment, Medtronic have made the designs of their ventilator system available. This will support the companies from other industries such as Ford, General Motors with their production.

We are seeing the unity among millions of individuals in working to fight the outbreak. MIT have been working on an open source, low cost ventilator which costs a sum of $100 to product, in comparison to a $30,000 ventilator. Elsewhere, two individuals who were 3D printing ventilator valves to support the vast outbreak in Italy.

In the UK, over half a million individuals volunteered to support the National Health Services in less than 48 hours (applications were closed at three-quarters of a million as they took time to approve applicants). Elsewhere, a self-reporting app tracking COVID-19 symptoms saw 750K downloads in 24 hours which would provide vital data for monitoring individuals from inside their homes.

The whole world is in uncharted territories right now and the future can only be speculated. The one certainty is the great companies and employees in the Medical industry are working at full capacity (and beyond) to support the control of the COVID-19 outbreak and it is important that we are doing what we can as individuals to support this.

Codethink continues to support the industry through these challenging times with fully remote system development and integration services.