Installing Linux on most PCs is easy — you pop in a DVD or a USB stick, click through the install process, and you’re most of the way there. When it comes to more specialised devices, however, installing and running an operating system isn’t quite so straight-forward.

Embedded devices, for example, vary wildly in their specifications and their capabilities. Unlike PCs, they lack standardised hardware platforms, protocols and interfaces that make it easy for the operating system to speak to the hardware. This is where Board Support Packages are used, and they are used often. Most ‘smart’ devices you own are likely to use BSPs in some fashion, whether they be embedded development boards like Arduinos, or IoT appliances, smartphones and more.

Before continuing, we have to delve into some of the previous paragraph’s terminology. To better understand what Board Support Packages are, it’s important to also understand what an operating system is, and what a kernel is.

So what is a BSP? The answer to that is tricky, because BSPs can vary quite significantly in size and scope and as a result of that different people define BSPs in different ways.

In simple terms, Board Support Packages are the bundles of patches to the operating system’s core layers that allow it to run on a specific piece of hardware. Unlike a kernel, the BSP provided by an Original Equipment Manufacturers (OEM) will include all the software that is required to make the board usable for whatever application it is meant to perform -- this means a BSP will often include not just a kernel but also a bootloader, a root filesystem, device drivers, and more.

However, this is not always the case. One of the reasons why BSPs are difficult to define is because they each contain and affect different components. Some are as simple as a few added patches to a kernel, thus allowing it to run on the hardware in question. Some are far more complex, and involve every part of the operating system stack. This can depend on the complexity of the board in question or the functions required from it: basic boards will only require basic BSPs that enable functions as basic as initialising the processor, communication buses, clocks and memory — to power the board in question and boot it up. More complex BSPs can include drivers that allow the operating system to communicate with the board’s peripherals, applications to use and configure these peripherals, services required to keep the board’s functionality running properly, and more. 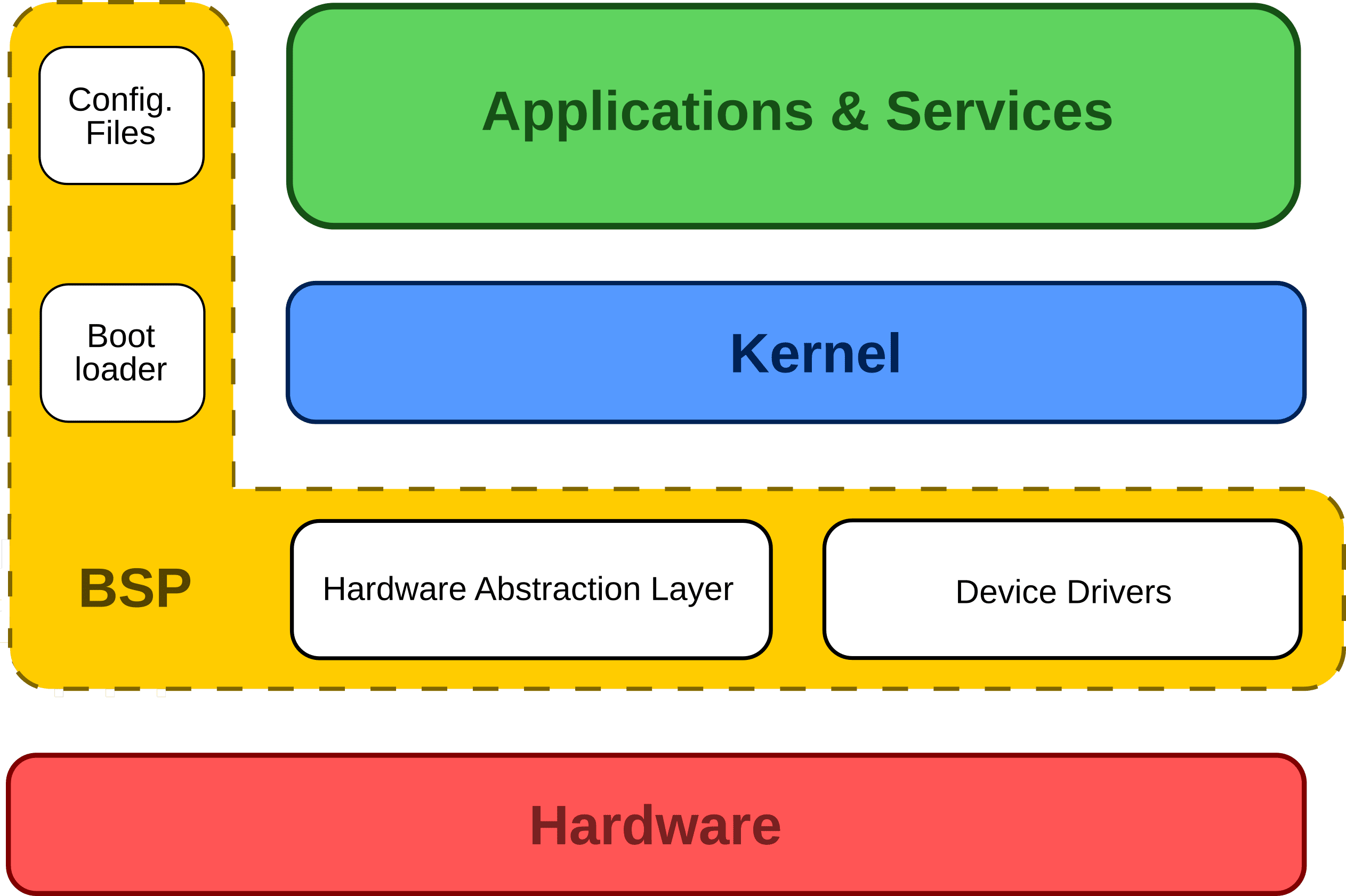 Example of a Board Support Package’s place within an operating system stack. BSPs often introduce patches on several layers of the stack, with the biggest changes taking place on the lower levels.

BSPs are found in the entirety of the hardware industry; the chances of a piece of electronics shipping without having had some sort of BSP is minimal, but today they are most visible on embedded devices. This is partly due to the fact that they are often not built on standardised platforms and also partly due to the wide range of different specifications and components. These devices sometimes run Real Time Operating Systems (RTOS) like Zephyr for speed and efficiency, but in the last few years the increasing computing power of these devices have allowed them to run the more complex and versatile Linux kernel. The fact that the Linux kernel is free, open source, and vendor agnostic has also made it a popular choice for OEMs.

Board Support Packages are quite useful, but they are not a flawless solution. There are sometimes problems with the way they are maintained. In the case of BSPs created to run Linux on devices, for example, the patches that are created and included are often not upstreamed. This often means that the kernel versions included in these packages are out of date. There might be several reasons for this: the changes made by the hardware vendor might not be ready for mainstream use yet, or they might have been deemed to not be up to the standard expected by the upstream bootloader or kernel projects. Sometimes some vendors are simply not interested in upstreaming their work, too.

This introduces potential security concerns and the loss of features included in the latest versions. It is especially problematic when support for these BSPs is dropped, because this can mean that the hardware in question will never receive these updates at all. So the device you might have bought a few months ago is now obsolete, either because the manufacturer can no longer afford to maintain it, or because it was in their interest to stop maintaining it.

This does not apply to all BSPs, particularly since they are not a Linux-specific concept. The term was coined a decade before Linux even existed, in 1981, and the concept slowly grew in popularity until being adopted widely throughout the software industry. Though its origins may be ancient by technology’s standards, their importance has not diminished — particularly as mobile and embedded devices grow in popularity.