Using and understanding top to measure CPU and memory consumption

This post was originally a quick email to a client and their other partners detailing what the output from the "top" tool means, which is a utility which shows a list of running processes on a UNIX system along with statistics on their memory and CPU consumption.

Here's an example of what top displays: 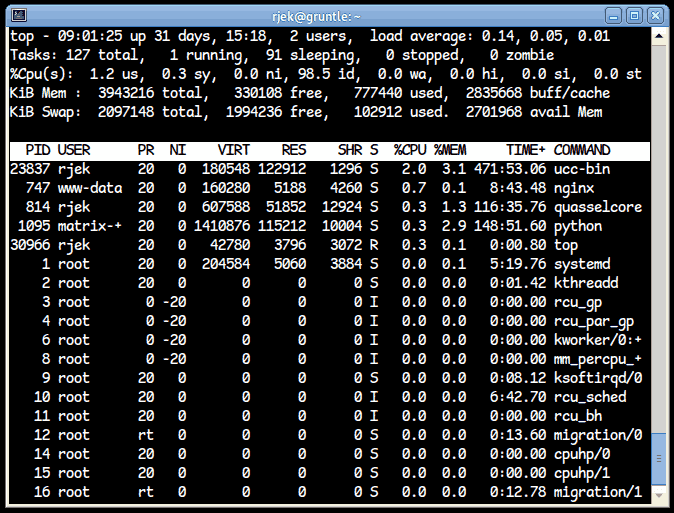 I'll dismantle the lines one by one, from the 'top'. I'm sure a lot of this is already known by you all or be obvious, but it may be worth exploring it all just in case, as there's a lot of confusion about some of the data here.

In the above image, the instantaneous load is exactly 1 (there is one process, top itself, running), but this number is not useful to know. This is why the numbers are averaged over time.

The important thing to remember is that this is all "wallclock time", time as a clock on the wall might measure it, not CPU time, and they don't always add up. They are all expressed as percentages of available CPU time used since top last refreshed.

Total swap, free swap, used swap, total available memory. Swap memory is block-device (such as a hard drive, or a compressed RAM disc) memory used to page out data from real memory that Linux believes not to be in use, freeing real memory for use by applications and Linux for caching.

Now comes a table of processes and statistics. The columns are as follows:

Note: This document is licensed under CC-BY-SA and was originally created by Codethink Ltd.