At Codethink over the past few months we’ve been revisiting our approach to assembly of whole-stack systems, particularly for embedded Linux systems and custom GNOME based systems.

The result of our latest work is a new project, BuildStream, which aims initially to satisfy clear requirements from GNOME and Baserock, and grow from there. BuildStream uses some key GNOME plumbing (OSTree, bubblewrap) combined with declarative build-recipe description to provide sandboxed, repeatable builds of GNOME projects, while maintaining the flexibility and speed required by GNOME developers.

But before talking about BuildStream, lets go over what this can mean for GNOME in 2017.

Currently we build GNOME in various ways, including JHBuild XML, Flatpak JSON for the GNOME Runtime and SDK, and GNOME Continuous JSON for CI.

We hope to centralize all of this so that the GNOME release team need only maintain one single set of core module metadata in one repository in the same declarative YAML format.

To this end, we will soon be maintaining a side branch of the GNOME release modulesets so people can try this out early.

JHBuild was certainly a huge improvement over the absolutely nothing that we had in place before it, but is generally unreliable due its reliance on host tooling and dependencies.

Newcomers can have a hard time getting off the ground and making sure they have satisfied the system dependencies. Builds are not easily repeatable, you cannot easily build GNOME 3.6 today with a modern set of dependencies. Not easy to test core GNOME components like gnome-session or the gnome-initial-setup tool.

BuildStream nips these problems at the bud with an entirely no-host-tooling policy, in fact you can potentially build all of GNOME on your computer without ever installing gcc. Instead, GNOME will be built on top of a deterministic runtime environment which closely resembles the freedesktop-sdk-images Flatpak runtime but will also include the minimal requirements for booting the results in a VM.

Building in the Swarm

BuildStream supports artifact cache sharing so that authenticated users may upload successful build results to share with their peers. I doubt that we’ll want to share all artifacts between random users, but having GNOME Continuous upload to a common artifact cache will alleviate the pain of webkit rebuilds (unless you are hacking on webkit of course).

BuildStream will also be available as an alternative to flatpak-builder.

We will be providing an easy migration path and conversion script for Flatpak JSON which should be good enough for most if not all Flatpak app builds.

As the Flathub project develops, we will also work towards enabling submission of BuildStream metadata as an alternative to the Flatpak Builder JSON.

Unlike many existing build systems, BuildStream treats the problem of building and distribution as separate problem spaces. Once you have built a stack in BuildStream it should be trivial enough to deploy it as rpms, debian packages, a tarball/ostree SDK sysroot, as a flatpak, or as a bootable filesystem image which can be flashed to hardware or booted in a VM.

Our view is that build instructions as structured metadata used to describe modules and how they integrate together is a valuable body of work on its own. As such we should be able to apply that same body of work reliably to a variety of tasks – the BuildStream approach aims to prove this view while also offering a clean and simple user experience.

BuildStream is written in Python 3, has fairly good test coverage at this stage and is quite well documented.

BuildStream works well right now but still lacks some important features. Expect some churn over the following months before we reach a stable release and become a viable alternative for developing GNOME on your laptop/desktop.

Note that for the time being the OSTree requirement may be too recent for many users running currently stable distros (e.g. debian Jessie). This is because we use the OSTree gobject introspection bindings which require a version from August 2016. Due to this hard requirement it made little sense to include special case support for older Python versions.

However with that said; if this transitional period is too painful, we may decide to lower the Python requirement and just use the OSTree command line interface instead.

The BuildStream design in a nutshell is to have one abstract core, which provides the mechanics for sandboxing build environments (currently using bubblewrap as our default sandbox), interpreting the YAML data model and caching/sharing the build results in an artifact cache (implemented with ostree) and an ecosystem of “Element” plugins which process filesystem data as inputs and outputs.

In a very abstract view, one can say that BuildStream is like GStreamer but its extensible set of element plugins operate on filesystem data instead of audio and video buffers.

This should allow for a virtually unlimited variety of pipelines, here are some sketches which attempt to illustrate the kinds of tasks we expect to accomplish using BuildStream.

Import a custom vendor tarball, build an updated graphics stack and BSP on top of that, and use a custom export element to deploy the build results as RPMS: 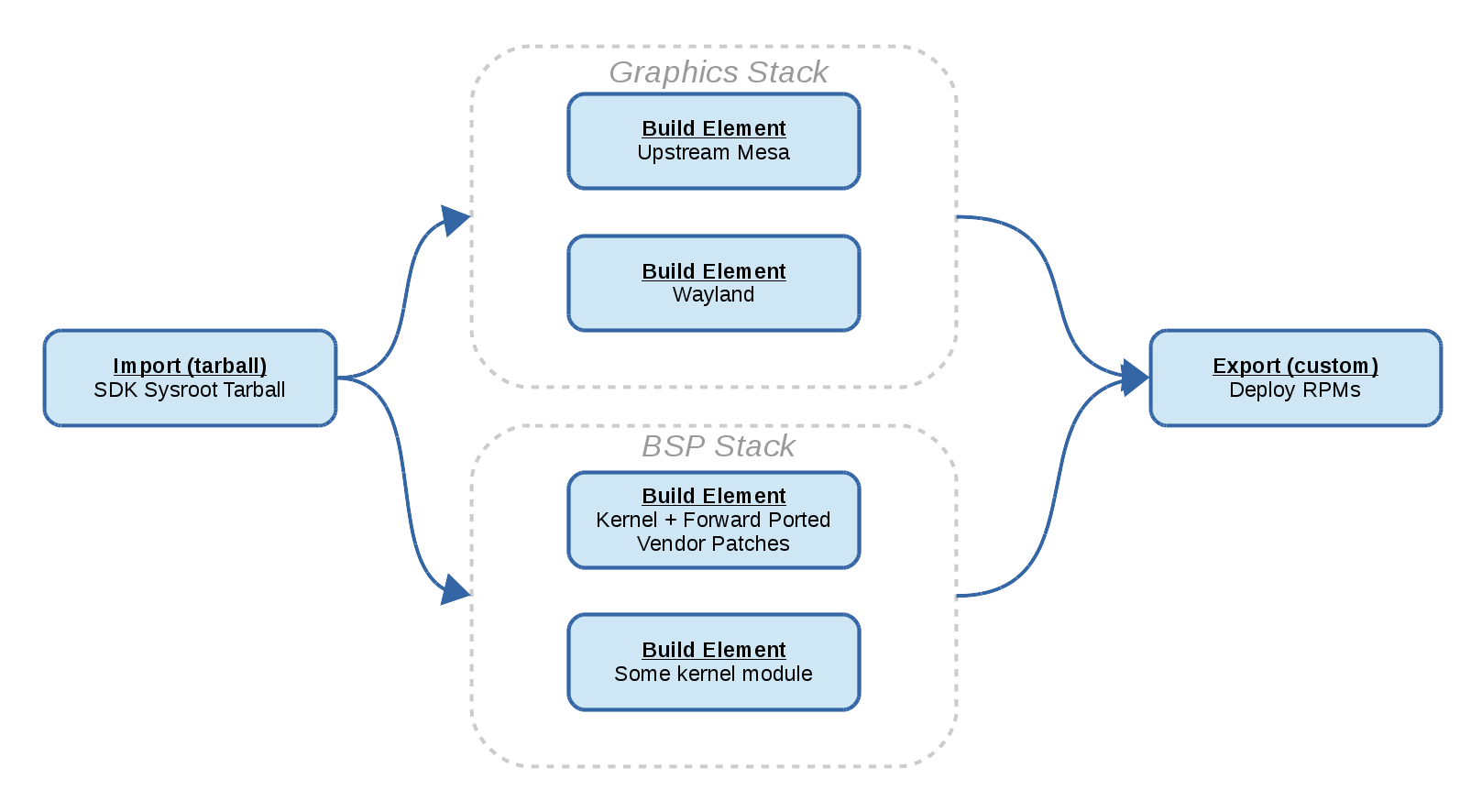 Import the base runtime ostree repository generated with Yocto, build the modules for the freedesktop-sdk-images repository on top of that runtime, and then deploy both Runtime and SDK from that base, while filtering out the irrelevant SDK specific bits from the Runtime deployment:

Import an arbitrary but deterministic SDK (not your host !) to bootstrap a compiler, C runtime and linux kernel, deploy a bootable filesystem image: 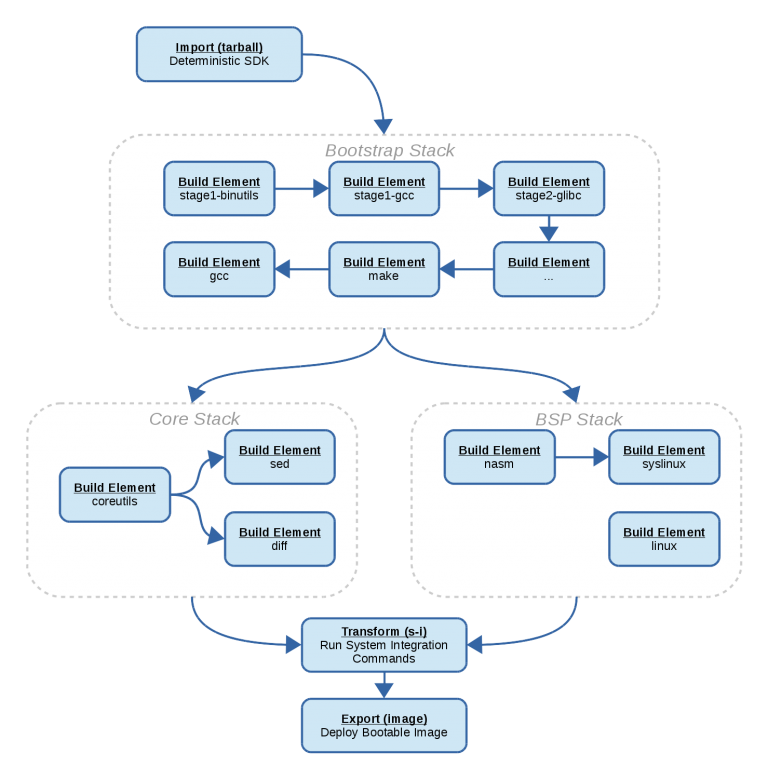 Build pipelines are modular and can be built recursively. So a separate project/pipeline can consume the same base system we just built and extend it with a graphics stack:

What follows are some instructions to try out BuildStream in its early stages.

For this demo we chose to build a popular application (gedit) in the flatpak style, however this does not yet include an ostree export or generation of the metadata files which flatpak requires; the built gedit result cannot be run with flatpak without those steps but can be run in a build-stream shell environment.

As you can see we’re currently hosted from my user account on gitlab, so our next steps is to sort out a proper hosting for the project including mailing list, bug tracking and a place to publish our documentation.

For right now, the best place to reach us and talk about BuildStream is in the #buildstream channel on GNOME IRC.

If you’d like to play around with the source, a quick read into the HACKING file will provide some orientation for getting started, coding conventions, building documentation and running tests.

With that, I hope you’ve all enjoyed FOSDEM and the beer that it entails :)