Over the course of the last few months, Codethink have conducted an investigation into whether or not Linux systems can be configured to be deterministic, so that performance over time is made to be more predictable and overall improved by tweaking the kernel in certain ways. The investigation was kicked off by Niall Dalton at Tensyr, who started running tests with certain kernel boot parameters changed and saw positive results. Codethink reproduced Niall's experiments and then attempted further performance improvements.

Possible applications of this would be in critical systems, where processes must be able to run either uninterrupted or with a predictable level of interference factored in.

We conclude that, with appropriate separation and tunings, we can get something approximating soft real-time on Linux without too much issue. However, difficulty arises from interference due to the housekeeping processes.

The results we saw from our tuned systems were far better than our baseline systems, and variance was predictably limited.

Our test program was a simple C script that essentially said

The stress program we used was stress-ng. The latency was the difference between the start and end time of each measurement. We ran a number of different work processes:

We ran a mixture of individual tests with each process running on each isolated CPU core (1-3), and parallel tests with a different process on each core, running simultaneously. With the latter, we could see certain events (for example dips and spikes in the latency) occurring at the same time across all three cores. Example below: 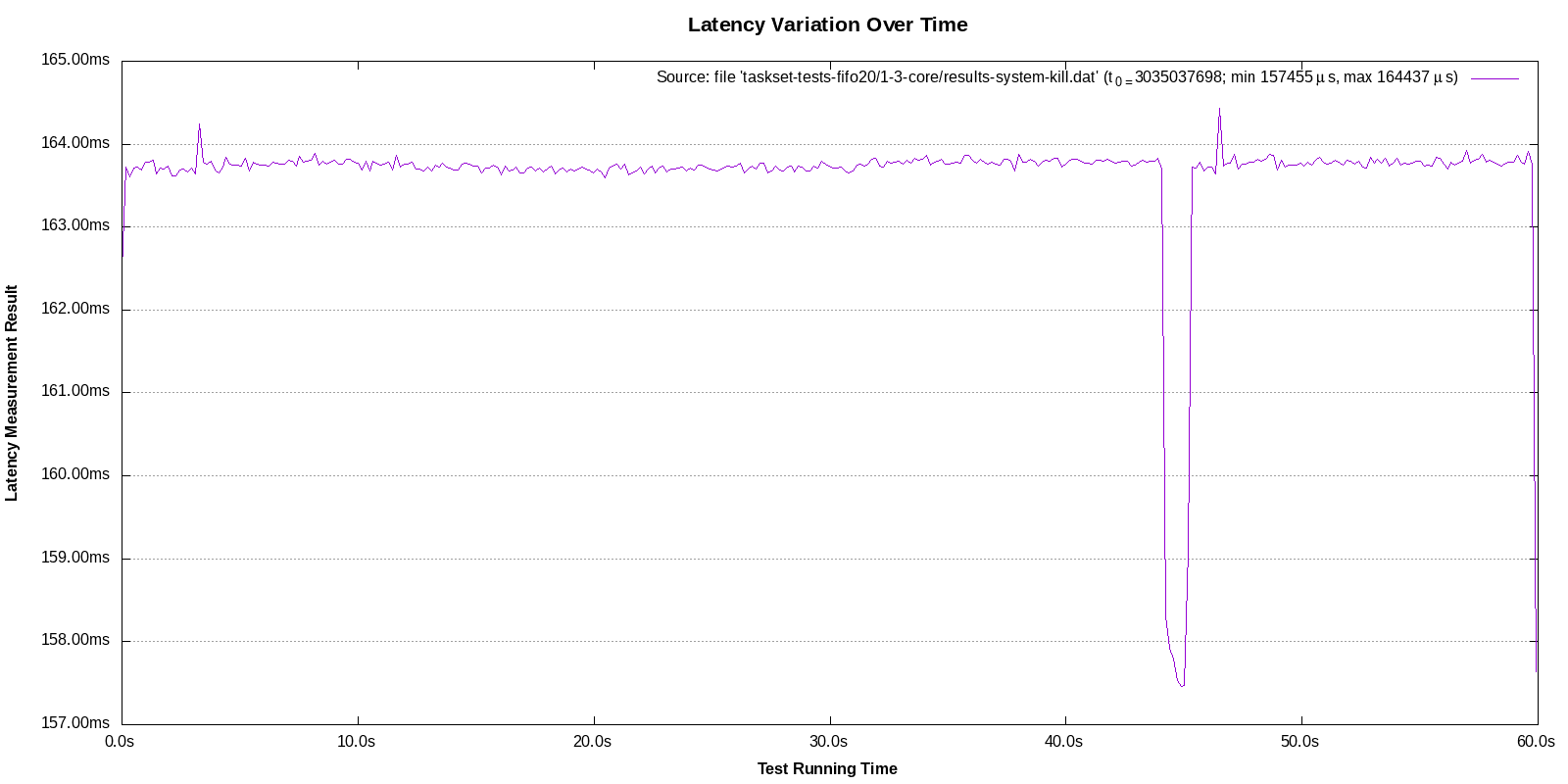 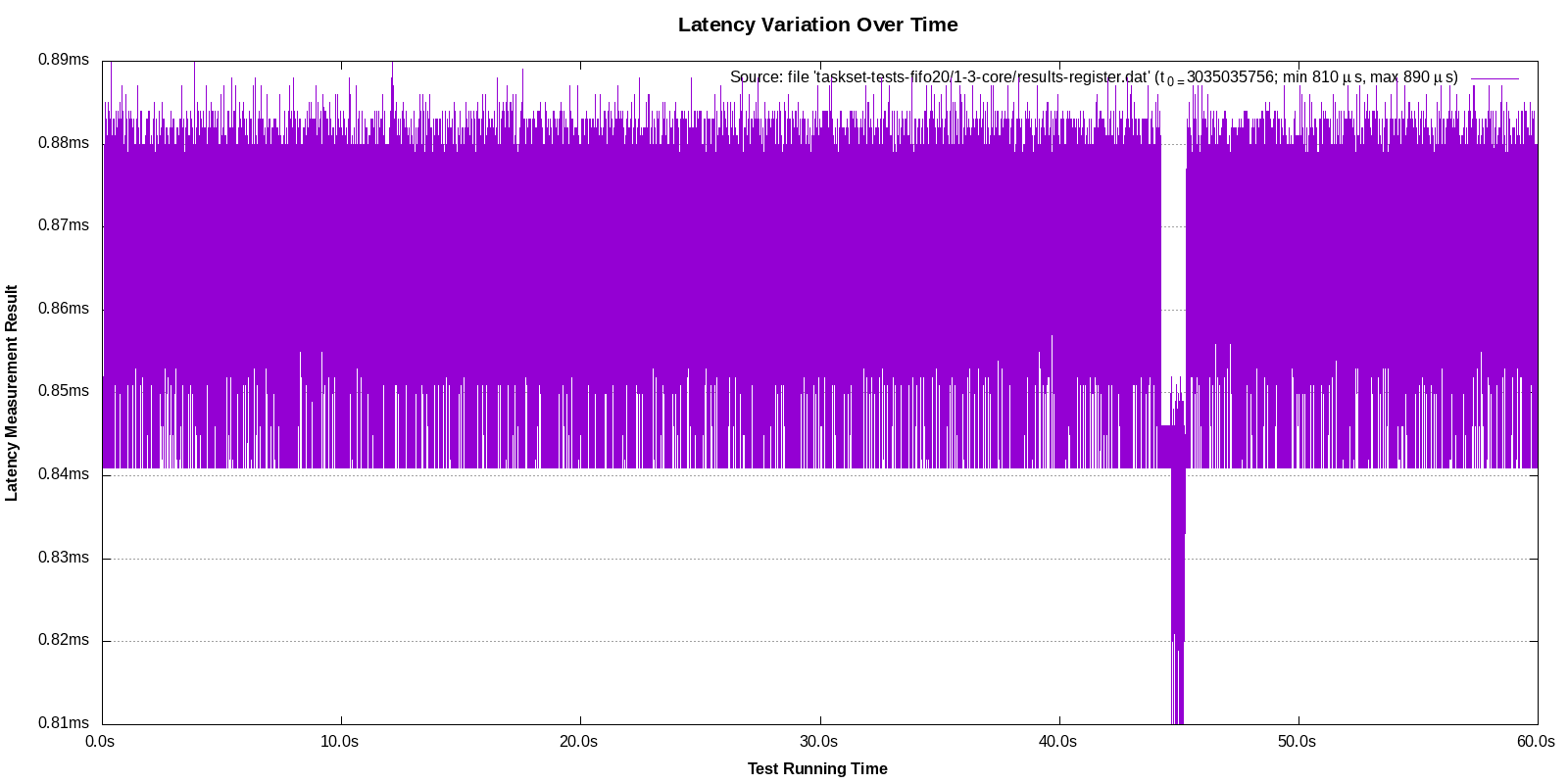 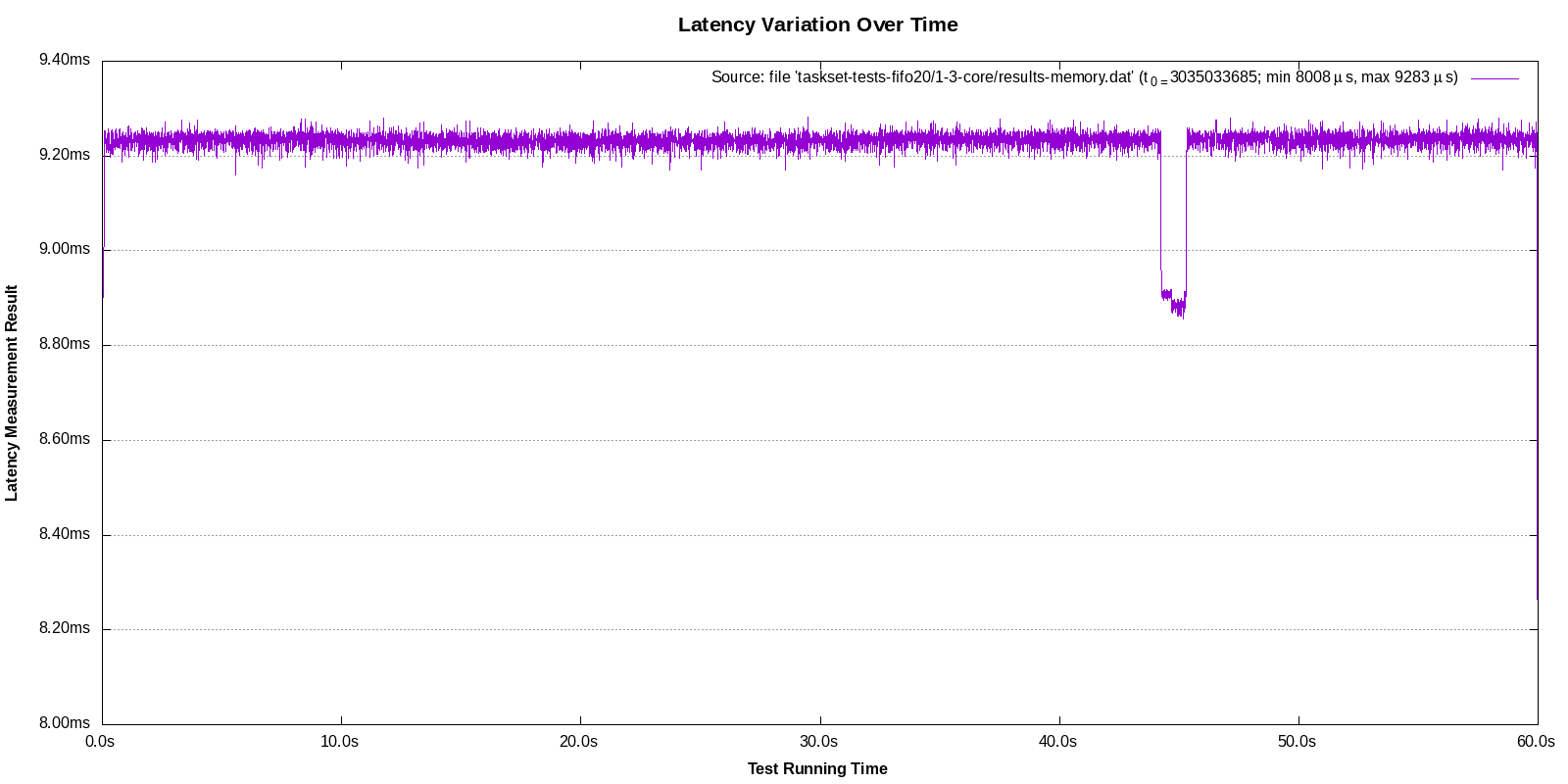 The following boot parameters (supplied by Niall Dalton) were used:

Various "housekeeping" and "actually do the IO work" threads exist and need to run in the kernel, but we want to keep them away from our designated cores. So, we moved IRQs away from our CPUs and pointed them towards the housekeeping CPU with

The rest of the configurations are as follows (note, each item of hardware used a slightly different set of configurations, depending on its capabilities):

A selection of graphs plotted from data from the automotive rig are below, with the tuned kernel results plotted against baseline results. Comparing the two, we can see less variance as well as a marked improvement in overall latency of anywhere between 40-96%, when using the tuned kernel. 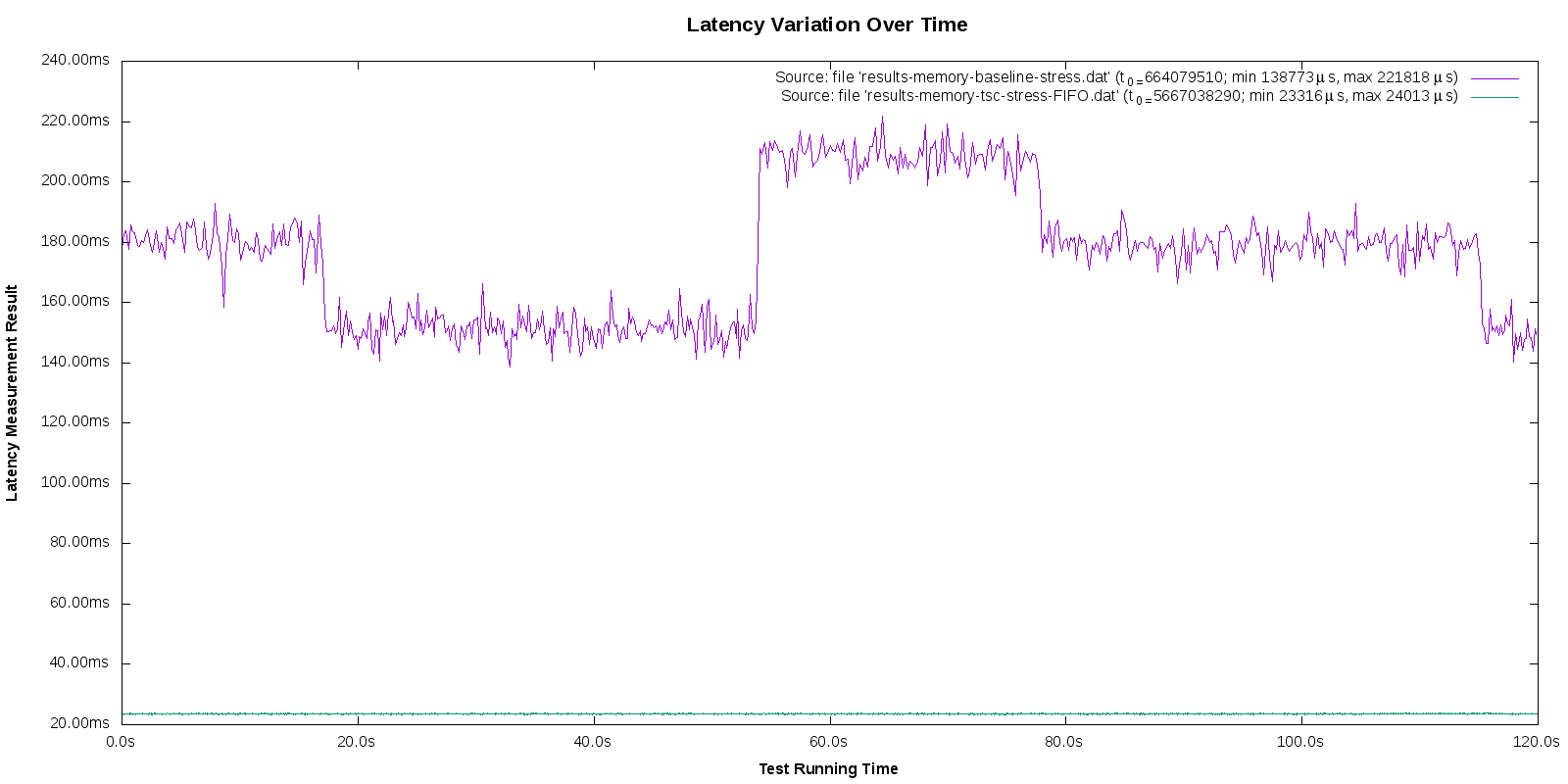 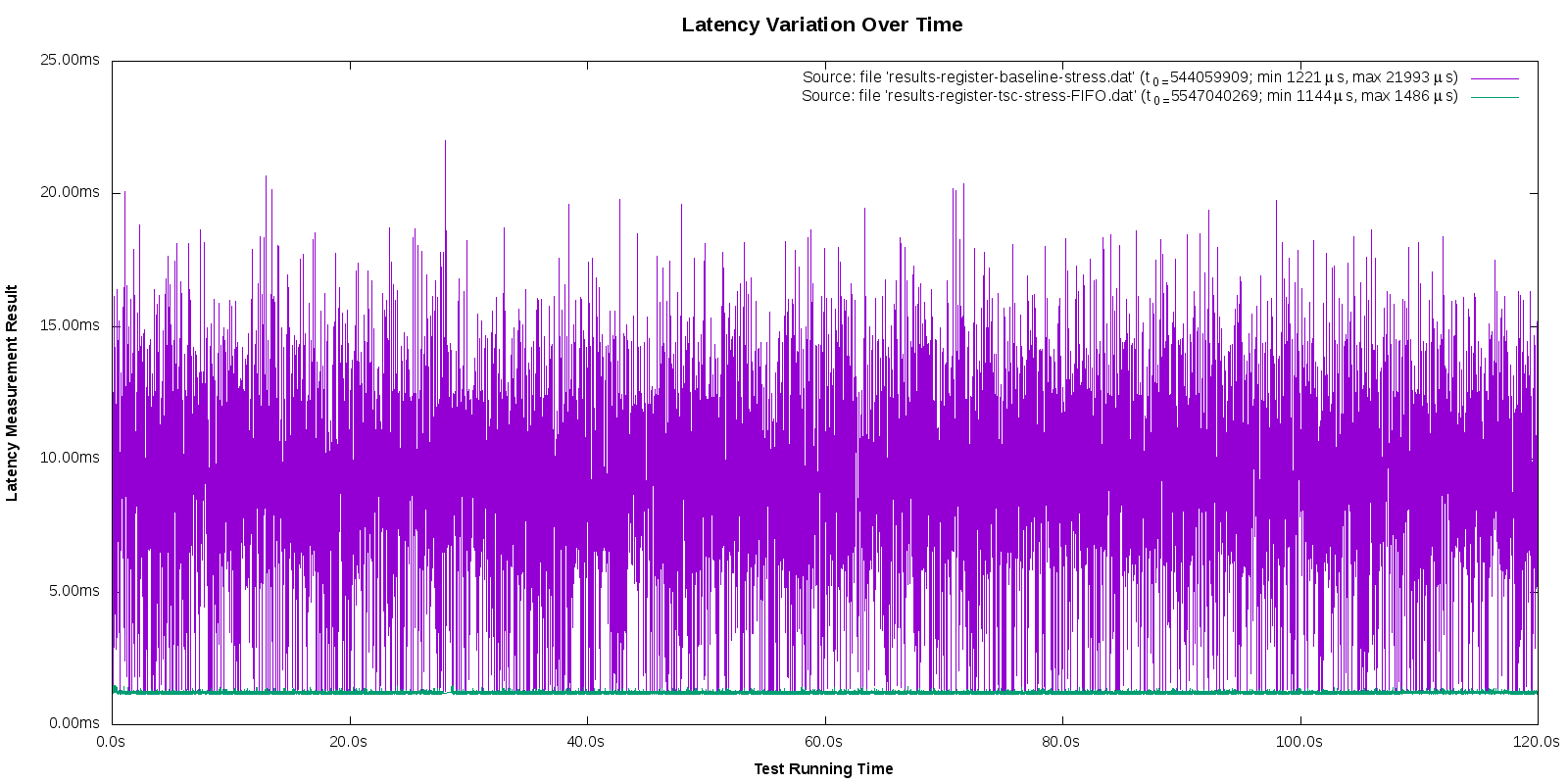 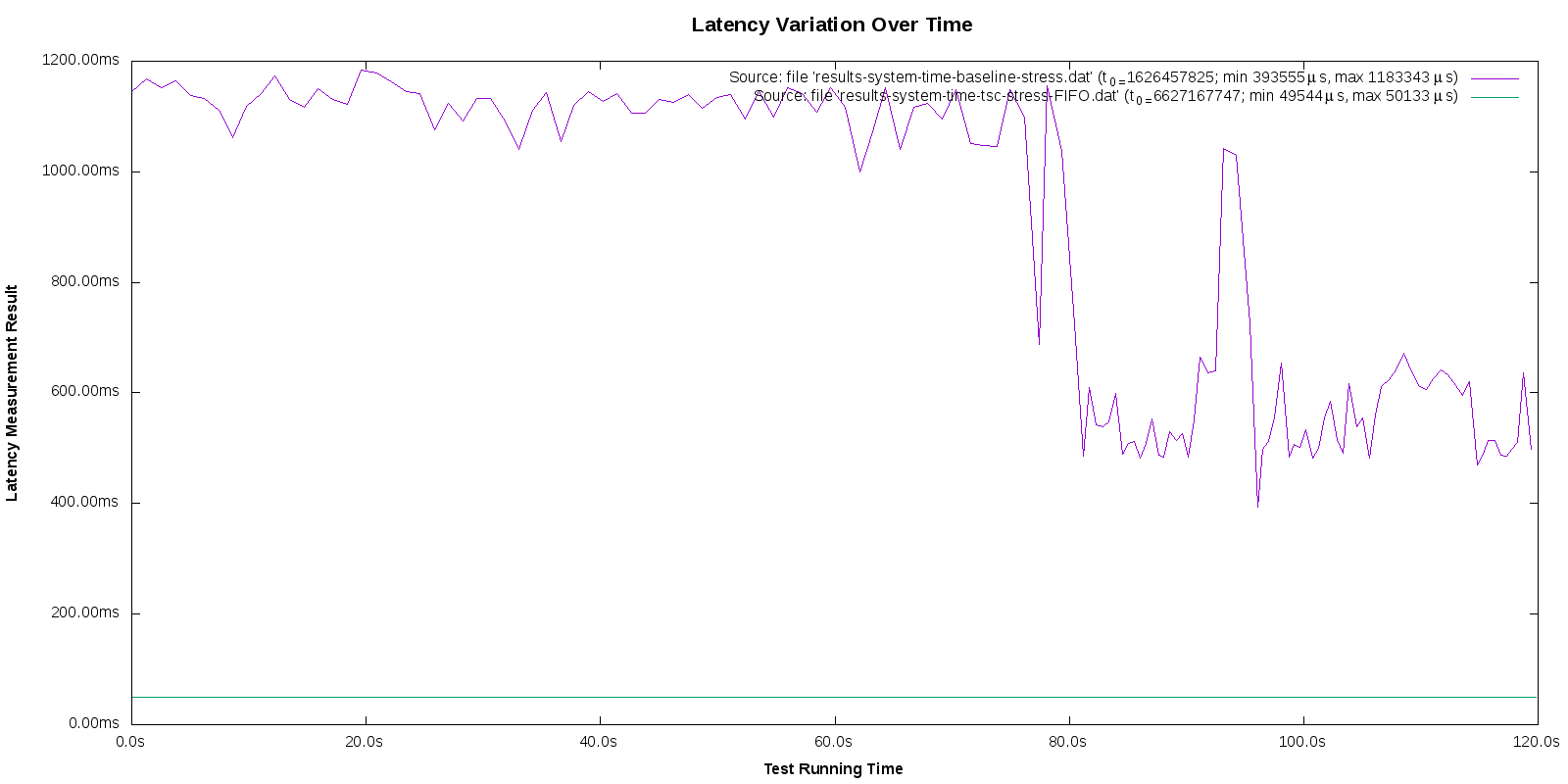 For the truly curious, our GitLab instance is open and can be viewed here. There are a number of wiki pages containing information and results from the tests we ran and developed throughout the project.

We found with the tests run on the laptop that we were seeing jumps in latency every so often. These correspond with CPU frequency changes seen in the datasets, probably due to thermal variance in the Intel processor. Example below:

From the facts that we saw similar (albeit less frequent) frequency changes on the automotive rig, and that we didn't see these jumps on the Jetson TK1, we conclude that:

a) ARM processors may be less susceptible than Intel processors to CPU frequency changes, and b) Intel Atom processors may not jump in frequency as often as the Intel i7, but the jumps will likely last for longer when they do occur.

It is worth noting that even with the jumps, the variance remains within ~5-6%.

Another interesting event we saw with the automotive rig parallel tests was periodic spikes in the tuned kernel when under stress, only in one CPU. Example below: 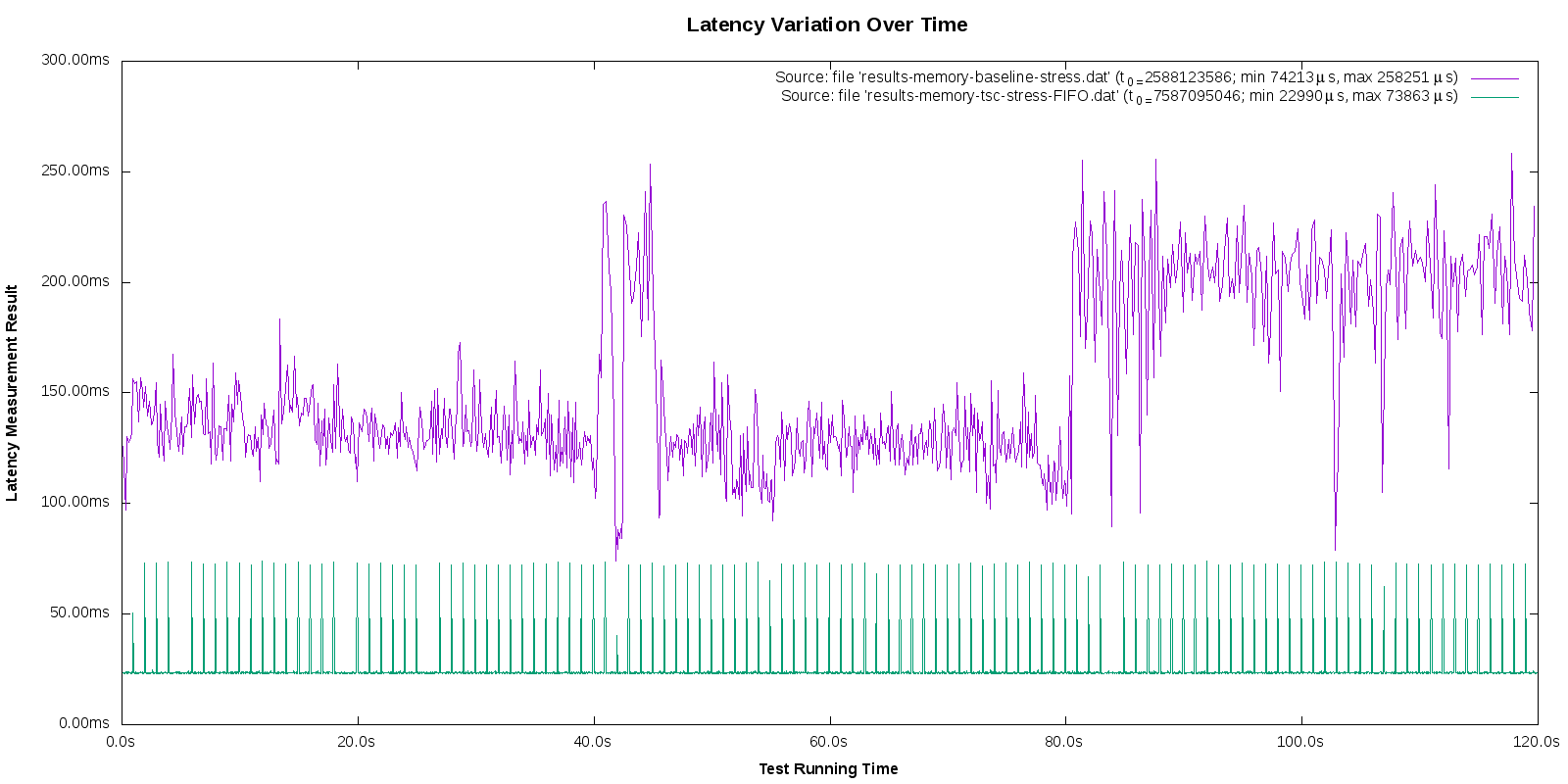 Since we were allowing stress to run across CPUs 1-3, we believe the kernel had allocated it to that core and, despite our process having priority, was being fair to both processes by allowing stress to interrupt intermittently. From this we can conclude that even when we tune and set ourselves to be high priority, without a real-time scheduler we can't stop ourselves being pre-empted eventually. However, the periodicity means this can be factored in, and the results are still much better than baseline.